RSS
← America’s Fall From Grace
Somebody Go Get Donny! →

My Seat On The Bus 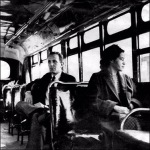 In the last 72 hours I have learned so much. I opened up to the general public and let the discourse come in. I welcomed the opportunity to have a respectful, open dialogue with others and to share with them the “why” behind the fear and anger that millions of us feel. However, I have seen the paper thin veneer of decency in this country ripped away to expose the seething and venomous hatred that lies just below the surface.  It isn’t that I didn’t know how oblivious and hateful some people are. It’s about the people who, for whatever reason, still think and contend that the hurt, anger, grief and protest (which is protected by the Constitution whether people agree with what we’re protesting about or not) is simply and ONLY about Hillary not being elected. Frankly that is woefully inaccurate, ignorant and delusional.

I wrote in my previous blog post that it is so much deeper than that and I meant it. I put it in the plainest of terms; I shared the terrible, painfully racist, xenophobic and violent encounters that were and continue to be reported and was dismissed as spreading propaganda. Are you serious right now?! I don’t know what kind of fairytale world you have created for yourselves but I live in reality. Not some diseased figment of my imagination where racism, sexism, Islamaphobia, xenophobia and hate don’t exist and where all that give voice to discrimination are silenced and told “that isn’t an issue” or “put it back in the deck”.

From my seat on the bus it isn’t the millions of upset people in this country who are wrong, it is those who perpetrated this atrocity who are. Here’s the kicker as I ride the bus of discontent and heartache and look out the window at the scenes as I pass by: many of you see absolutely NOTHING wrong with all that Donald Trump has said and done. You dismiss and trivialize the POV of millions and you refuse to believe or repudiate any of the hate speech and violence that is being perpetrated by Trump supporters. Hate speech and violence that he spurred on and approved of during these last 18 months. But now wants us to tow the line and unite and heal the racial divide. It’s so much bigger than a divide, it is a chasm that is deeper and wider than the Grand Canyon.

Posted by grahamcrackercrumbs09 on November 11, 2016 in Grinds My Gears, Social Commentary

← America’s Fall From Grace
Somebody Go Get Donny! →